Paint is cheap. Results are bold. Carbon savings are forever.

No matter the traffic, drivers stuck on Highway 99 generally cannot use the right lane. That red painted bus lane is reserved for the RapidRide E Line (plus business access related turns). The bus zooms right by those frustrated drivers and leaves them wondering why they didn’t ditch the car and tap their Orca card instead.

The history of Seattle’s dedicated bus lanes is not all that visionary. Voters approved the Transit Now levy in 2006, and bus-only lanes were part of the deal. So, Seattle deployed them. Even on Highway 99 and to the aggravation of industrial business owners, whose complaints have quieted.

The result? RapidRide bus ridership exploded. The E line is the system’s — and state’s — top bus for ridership, exploding from 11,000 riders a day in 2013 (when it was known as the 358) to 15,000 riders a day in just the first year (a 35% increase) to 17,000 riders a day took the E line in 2019 (a 55% increase over 2013’s ridership). This wasn’t because the buses were red, or that they rebranded as a letter of the alphabet, or had fancier bus stops. It was because of the dedicated bus lanes. This gave Metro the ability to plan higher frequencies with on-time buses showing up without sitting in traffic, illustrating how much better and more reliable it was to take the bus.

Wild idea: Give EVERY bus their own lane

Any bus route currently on a road that has two or more lanes in each direction should immediately paint that far right lane red. Paint them as red as the often-tickled character from Sesame Street. Fresh Elmo is a wild success. It speeds up frequencies, delivers higher ridership, and lowers the emissions for our biggest carbon emission contributor: transportation!

Over 55% of Seattle’s emissions come from passenger vehicles, ranking them the #1 source of emissions with over 1.6 million annual tonnes of CO2 in 2020. Buses, however, account for 0.17% of our emissions despite carrying over 50 million rides a year. So let’s paint bright red Elmo on Rainier Avenue, Queen Anne Avenue, on N 45th Street, Denny Way, Mercer Street, and every street with four or more lanes. Get rid of on-street parking for two lane roads and give the space to the bus instead.

The problem afflicting many of Seattle’s dedicated bus lanes is that they disappear right when they’re needed most at congested intersections or are clogged with too many cheating motorists. Deploying dedicated bus lanes widely and then enforcing them would fix that, however.

Save the laborious outreach, the studies, and the surveys. Seattle does not need to spend a lot of time planning or designing this. Just paint the lane red with words BUS ONLY on them. Done.

Since dedicated bus lanes help the environment, a year long SEPA review process can be eliminated. We don’t need to debate this to death. Since new paint will go on every street available, we don’t need to figure out which route deserves it or which community should get it first. One-Size-Fits-All. By deploying this citywide, we can get these dedicated bus lanes in place as traffic congestion returns and drivers are convinced to hop on the bus instead.

And yes, we have our light rail system, which is great and serves some communities, but the 100+ bus lines we have already cover the whole city of Seattle with transit access, and they could carry over 3 million riders a day if we legalize housing in Seattle neighborhoods again. So, again, there is no reason to wait.

Dedicating bus lanes throughout the city will grow ridership figures across the entire system, adding timely arrivals and frequencies. Hopefully it convinces the planners to let housing grow naturally and abundantly rather than shoved within imaginary boundaries around busy highways and a handful of bus routes. This is about making their jobs easier too.

What will the impact be?

Dedicated bus lanes mean more people will take the bus. Traffic patterns are not about mode preference, they’re about timing and ease. People want to get from point A to B in the easiest and quickest way possible. If that’s by bus, people will take it, especially if it saves them money. Metro’s unlimited transit pass is $99 per month, or, the current cost of a couple fill-ups at the gas pump.

I know what you’re thinking. “What about the cars? Won’t this make traffic worse?” Well, traffic is constant. Traffic was here before the dedicated bus lanes, and it’s there today. Traffic existed before I-5 and I’m sure we are all aware it has never left. Traffic is a gas, not a liquid. You don’t control the flow by changing the size of the pipe, the gas fills up whatever space you give it. So, let’s relegate this noxious gas to fewer lanes, squeezing down the space allotted to individual vehicles and letting the freely moving bus convince someone stuck 30 cars deep to use transit next time.

Also, let’s give bus drivers a dash cam and let them photograph any driver who thinks the rules of the road don’t apply to them. Snap the license plate and email the violator a ticket without getting the police involved. Or we can let bus riders and nearby pedestrians do it and attach reward incentives. Austin and New York are offering bounties for reporting cars parked in the bike lane.

This doesn’t need to be difficult or expensive. Rolling out a city-wide paint program isn’t difficult or expensive. Removing all the Seattle Process design-by-committee and talk-to-death headaches makes this a simple program to plan and execute. The cost of paint is less than the cost of Seattle’s deadly year on the roads. This idea isn’t even that bold. It just makes sense. Believe it or not, the City of Seattle already knows this stuff. There is no reason to delay.

Seattle’s streets aren’t perfect, but many of them have the space for some red paint. We are trying to reduce our emissions, create safer streets, reduce vehicle miles traveled and make our city more equitable. The city’s tight budgets point to innovative, inexpensive ideas. So why not do the easiest, cheapest, most obvious thing we have in our toolkit? 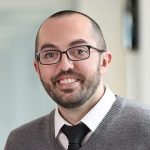 Ryan DiRaimo is a resident of the Aurora Licton-Springs Urban Village and board member of the neighborhood group ALUV. He works at an architecture firm downtown and seeks to leave a positive urban impact on Seattle and the surrounding metro. He advocates for more housing, safer streets, and mass transit infrastructure and hopes to see a city someday that is less reliant on the car.