Subprefecture and commune in Occitania, France

listen); Catalan: Ceret [səˈɾɛt]) is a commune in the Pyrénées-Orientales department in southern France.[2] It is the capital of the historic Catalan comarca of Vallespir.

Map of Céret and its surrounding communes

The name of the town in Catalan is Ceret.[3]

A plague epidemic hit Céret from 1651 to 1655 and killed about a hundred people. One of the doctors in charge, coming from Thuir, was fired for being repeatedly drunk and after having buried several sick people that were still alive.[6]

Céret seen from the north

The region around Céret is a major fruit producer, in particular famed for its cherries.

The Pont du Diable (Devil’s Bridge) is a single arch stone bridge built between 1321 and 1341. With a single span of 45.45 m, it was at the time of its construction the world’s largest arch bridge in terms of span length and remained so until 1356.[6]

The church of Saint Peter is the main church in Céret and was built from the 11th to the 18th centuries.

The Château d’Aubiry is an Art Nouveau style château from the end of the 19th century built by rolling paper magnate Pierre Bardou-Job.

The War memorial was sculpted by Aristide Maillol and inaugurated in 1922.

Céret is famous for its Musée d’Art Moderne (Museum of Modern Art), which has numerous Picasso paintings, sculptures and ceramics, including the famous bullfighting bowl series. The museum also features paintings by Chagall, Matisse, Herbin, Soutine, many Fauves and a few Impressionists. The top floor of the Museum hosts touring exhibitions. The museum is closed on Tuesdays.

The Museum of Musical Instruments, Céret opened in May 2013 and is hosting a unique collection of instruments and musical scores.

Céret holds an annual festival for the corridas which run during three days. The first bullfighting with killing of the bull occurred in Céret in 1894 and has been a tradition ever since.[13] This event is known as the feria. There are also bull runnings where young bulls (usually with their horns blunted) are run through the streets corralled by a group of horsemen and women. People wearing traditional white and blue (the Céret colors) outfits, chase from behind in an attempt to catch hold of the bull’s tail and hold on for as long as they can. The feria is always held the weekend nearest to 14 July, Bastille Day and around 30 to 40,000 people participate in the streets each year.

Céret regularly holds communal dances, where local amateurs or professionals dance in a ring. The dance is known as the sardanes. No pre-arrangement is made on the dancers behalf, locals note the time and place on posters around the city and turn up as they wish. More formal arrangements are also made on other occasions.

Céret has a market on Saturdays, where vendors sell mostly local produce, along with sausages, olives, cheese and wine. During the summer, there is also a market each Tuesday night that focuses on arts and crafts rather than produce. 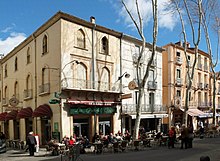 Céret has a continued tradition of being a home for artists, especially painters and poets. Pablo Picasso lived in Céret in the early part of the 20th century and Café Pablo in the town is dedicated to him. The Grand Café, still operating today, was a meeting place for many famous artists in the early part of the last century. Henri Matisse and Amedeo Modigliani, amongst other artists, visited at this time. Chaïm Soutine, the Russian emigre painter, lived in Céret for a period and painted many landscapes of the village and its surrounds. Aristide Maillol, a famous sculptor born in the local village of Banyuls-sur-Mer, is represented by two public sculptures – one outside the visitors information centre and the other on the war memorial. Harold Weston, the American modernist, lived in a farmhouse above Céret from 1926 to 1929.