listen); Catalan: Cotlliure, IPA: [kuˈʎːiwɾə]) is a commune in the southern French department of Pyrénées-Orientales.[3]

Map of Collioure and its surrounding towns

Collioure is named Cotlliure in Catalan.[4]

There is a record of the castle at « Castrum Caucoliberi » having been mentioned as early as 673, indicating that the settlement here was of strategic and commercial importance during the Visigoth ascendancy.

Collioure was taken in 1642 by the French troops of Maréchal de la Meilleraye. A decade later, the town was officially surrendered to France by the 1659 Treaty of Pyrenees. Because of its highly strategic importance, the town’s fortifications, the Château Royal de Collioure and the Fort Saint-Elme stronghold, were improved by the military engineer Vauban during the reign of Louis XIV. Nevertheless, Collioure was besieged and occupied by the Spanish troops in 1793, marking the last Spanish attempt to take the city. The city was retaken a year later by general Jacques François Dugommier.

In 1823, the territory of Port-Vendres became a commune, taking parts from the communes of Collioure and Banyuls-sur-Mer.[5]

On 21 January 1870, an exceptional climatic phenomenon occurred in Collioure, as observed by Charles Naudin at the time; more than one metre (39 inches) of snow fell in one day on the town. Many orchards as well as cork oak woodlands were damaged.[6]

Collioure is the name of an Appellation d’Origine Contrôlée (AOC) situated around the town, (Collioure AOC), producing red, rosé and a few white wines.
The ancient terraced vines in the hills behind the town also provide grapes for the apéritif and dessert wines of the (Banyuls) appellation, which shares its boundaries with the Collioure appellation.

Collioure is also famous for its anchovies, and its once-thriving fisheries are referenced in Mark Kurlansky’s book Salt.

The annual Saint Vincent festival is held around August 15, attracting twice the town’s population in visitors for several days of celebration with music and fireworks.[9]

In the early 20th century Collioure became a center of artistic activity, with several Fauve artists making it their meeting place. André Derain, Georges Braque, Othon Friesz, Henri Matisse, Pablo Picasso, Charles Rennie Mackintosh, James Dickson Innes and Tsuguharu Fujita have all been inspired by Collioure’s royal castle, medieval streets, its lighthouse converted into the church of Notre-Dame-des-Anges and its typical Mediterranean bay. Collioure’s cemetery contains the tomb of Spanish poet Antonio Machado, who fled here to escape advancing Francoist troops at the end of the Spanish Civil War in 1939.

The British novelist Patrick O’Brian lived in the town from 1949 until his death in 2000, and his novel The Catalans describes Collioure life as it was in the past. He also wrote a biography of Picasso, who was an acquaintance. O’Brian and his wife Mary are also buried in the town cemetery.

The start of Rose Macaulay’s 1950 novel,The World My Wilderness, is set in Collioure.

Ninety-eight reproductions of Matisse’s and Derain’s works are displayed exactly where these two masters of Fauvism painted the originals in the early 20th century. 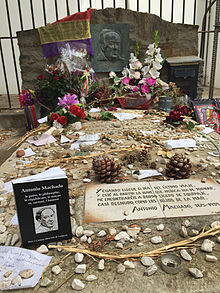