Skip to content
For the historical region of Southern Europe, see Occitania.

listen); Occitan: Occitània [utsiˈtanjɔ]; Catalan: Occitània [uksiˈtaniə]) is the southernmost administrative region of metropolitan France excluding Corsica, created on 1 January 2016 from the former regions of Languedoc-Roussillon and Midi-Pyrénées. The Council of State approved Occitania as the new name of the region on 28 September 2016, coming into effect on 30 September 2016.[4]

The modern administrative region is named after the larger cultural and historical region of Occitania, which corresponds with the southern third of France. The region of Occitania as it is today covers a territory similar to that ruled by the Counts of Toulouse in the 12th and 13th centuries. The banner of arms of the Counts of Toulouse, known colloquially as the Occitan cross, is used by the modern region and is also a popular cultural symbol. In 2015, Occitania had a population of 5,839,867. 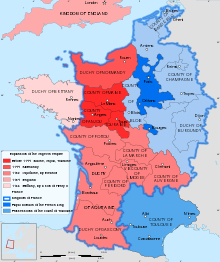 Enacted in 2014, the territorial reform of French regions had been subject to debate for many years.[5] The reform law used as the new region’s provisional name the hyphenated names of its predecessors: Languedoc-Roussillon and Midi-Pyrénées, in alphabetical order. As for most of the merged regions, a permanent name was then proposed by the new regional council to replace that provisional name.[6][7][8] On 24 June 2016, the Regional Council of Languedoc-Roussillon-Midi-Pyrénées adopted the name Occitania after lengthy public consultation.[9] The provisional name of the region was withdrawn on 30 September 2016, when the new name took effect.[4]

Occitania, the new name, derives from the historical appellation of the broader region, and refers to the historical use throughout that territory of the Occitan language and its various dialects, which are so named for the word òc, the Occitan word for oui or « yes ». The circa 450,000 French Catalans living in the region (or Catalans of the North, as they mostly call themselves) expressed dismay at the regional assembly resolution, regarding the new name as ignoring their presence.[10] On 10 September 2016, some 10,000 people (7,800 according to the police) demonstrated in Perpignan, demanding that the merged region name contain the words Pays catalan (literal translation: « Catalan country »).[11]

Occitania is the second-largest region in mainland France, covering an area of 72,724 km2 (28,079 sq mi); it has a population of 5,845,102 (2017).[12] It has a Mediterranean coast on the southeast and is neighboured by Provence-Alpes-Côte d’Azur on the east, Auvergne-Rhône-Alpes on the northeast and Nouvelle-Aquitaine on the west and northwest, as well as foreign borders of Andorra (Canillo, Encamp, La Massana, Ordino) and Spain (Aragon and Catalonia) on the south.

The largest communes of Occitania are (population as of 2017[update]:[13]

The new administrative region includes provinces and territories of diverse cultural and historical origin: Languedoc (High and Low Languedoc), Països Catalans (Roussillon, Cerdanya, Vallespir, Conflent, Capcir), the County of Foix, and the eastern parts of what was formerly Gascony (Armagnac, Comminges, Couserans, Bigorre, Condomois, Nébouzan, Rivière-Verdun), and Guiana (Carcin, Roergue). During the Ancien Régime, most of these territories lay within the jurisdiction of the Parlement of Toulouse, founded in 1443.

Occitania[15] (Occitània[16] or Óucitanìo[17] in Occitan) is a historical region[18][19][20] of southwestern Europe in which Occitan was the main vernacular language. This territory was already united, in Roman times first as the Diocese of Vienne and then as the Seven Provinces (Septem Provinciae)[21] and in Aquitaine at the beginning of the Middle Ages[22] (Aquitanica, Visigoth kingdom of Toulouse),[23] before the Frankish conquest. Occitania is characterized by « the Occitan culture », since the Middle Ages another expression of Romance culture in France and to a lesser extent in Italy, Spain and Monaco.[24] It is presented and recognized on institutional sites of French communities, such as those of the Lot-et-Garonne County Council[25] and the city of Agen.[26] 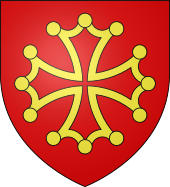 The blazon of the counts of Toulouse and Languedoc: the Occitan cross gold on gules.

Most of the territory that came to be called Languedoc (the region where langue d’oc is spoken; in Occitan Lengadòc, pronounced [ˌleŋɡɔˈðɔ(k)]) became attached to the Kingdom of France in the 13th century, following the Albigensian Crusade (1208–1229). This crusade aimed to put an end to what the Church considered the Cathar heresy, and enabled the Capetian dynasty to extend its influence south of the Loire. As part of this process, the former principalities of Trencavel (the Viscounty of Albi, Carcassona, Besièrs, Agde and Nimes) were integrated into the Royal French Domain in 1224. The Counts of Toulouse followed them in 1271. The remaining feudal enclaves were absorbed progressively up to the beginning of the 16th century; the County of Gévaudan in 1258, the County of Melgueil (Mauguiò) in 1293, the Lordship of Montpellier in 1349 and the Viscounts of Narbonne in 1507.

The territory falling within the jurisdiction of the Estates of Languedoc, which convened for the first time in 1346, shrank progressively, becoming known during the Ancien Régime as the province of Languedoc.

The year 1359 marked a turning point in the history of the province.[27] The three bailiwicks (sénéchaussées) of Bèucaire, Carcassona and Tolosa had the status of bonnes villes (towns granted privileges and protection by the king of France in return for providing a contingent of men at arms). In that year, the three entered into a perpetual union, after which their contribution of royal officers was summoned jointly rather than separately for each of the three sénéchaussées.[28][29][30][31]

Towards the end of the 14th century, the term « country of the three seneschalties » (pays des trois sénéchaussées), later to become known as Languedoc, designated the two bailiwicks of Bèucaire-Nimes and Carcassona, and the eastern part of Tolosa (Toulouse), retained under the Treaty of Brétigny. At that time, the County of Foix, which belonged to the seneschal of Carcassona until 1333 before passing to Toulouse, ceased to belong to Languedoc. In 1542, the province was divided into two généralités: Toulouse for Haut-Languedoc, and Montpellier for Bas-Languedoc. This lasted until the French Revolution in 1789. From the 17th century onward, there was only one intendance for the whole of Languedoc, with its seat in Montpellier. 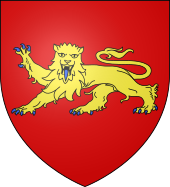 Coat of arms of the duchies of Aquitaine and Guyenne, taken again by the province of Guyenne, of gules with a leopard of gold

The former provinces of Gascony (in Gascon Gasconha, Occitan pronunciation: [ɡasˈkuɲɔ]), and Guyenne; in Occitan Guiana [ˈɡjanɔ]) were historically part of the Great South-West of France (Grand Sud-Ouest français), and derived from the medieval duchyies of Vasconia, Aquitaine and then Guyenne. Today, only the eastern regions of the two provinces are part of Occitania. These areas correspond essentially to the territories acquired by the kings of England, dukes of Guyenne, under the treaty of Brétigny of 1360, and which then remained under the jurisdiction of the provincial appellate court of Toulouse (Parlement of Toulouse) after the creation of the Parlement of Bordeaux in 1462. From that time, they were generally grouped under the name of Haute-Guyenne, by opposition with Basse-Guyenne, which was dependent on the Parlement of Bordeaux. 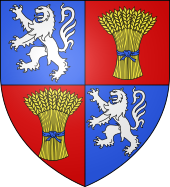 Coat of arms of the former province of Gascogne, quartered azure a lion of silver and gules a sheaf of wheat azure bound gold, was created for Louis XIV: it refers to the lion of counts of Armagnac

The territory of the former province of Guyenne (Guiana) that lies within the region corresponds with Quercy (the current department of Lot and the north of Tarn e Garona), and with Roergue (Avairon). These two counties are thus part of the Occitan linguistic area, in its Languedocien dialectal variant. They were possessions of the Counts of Toulouse from the 9th century, at various stages a minor branch or the main branch. Like the other possessions of the Counts of Toulouse, they were integrated for the first time with the French royal domain in 1271,and then yielded to the kings of England under the 1360 Treaty of Brétigny. The province of Quercy was definitely reunited with the Crown in 1472; Roergue, possession of the counts of Armagnac, did not follow until 1607. Both came within the province of Guyenne, under military rule from 1561. Together, they became the généralité of Montauban from 1635, which then became the province of Haute-Guyenne in 1779. Today, the name Guyenne no longer has administrative or political currency, although the Haut-Agenais used the term Pais de Guiana in a campaign which evoked its historical identity to promote the Lot-et-Garonne and part of the valley of Dròt. This reference is now superseded in the promotion of tourism by the designation Pais del Dròt. The appellations Quercy and Roergue, in contrast, retain a strong identity.

Gascony is the former province located on the territory of the current departments of Gers (Armanhac and Condomois), Hautes-Pyrénées (Bigorre), Lanas in the neighboring region, and parts of other departments of the two regions of Aquitània and Midi-Pyrénées (Comenge, Nebosan and Rivière-Verdun mainly in the south and west of Haute-Garonne, and Couserans in the western part of Ariège). Successively called Aquitania, Novempopulania, Vasconia (territory of the Vascones) and Gascony in the 13th century, the territory was geographically diverse, situated between the Atlantic Ocean, Garona and the Pyrenees. Claiming a cultural identity based on evolving occupation, from the Aquitani peoples of Proto-Basque language to a Gascon population sharing a latinized Occitan dialect, it constitutes the current Gascon linguistic area. Between the 15th and the beginning of the 16th centuries, it was progressively integrated into the Royal French domain. Comenge yielded to the kings of France in 1443, extinguishing the local dynasty. Armagnac, Bigorre and Nebosan followed, with the county of Foix, in 1607.

From the time of the French Revolution, the county was fully incorporated into the department of Ariège. The Occitan dialect traditionally spoken there is Languedocien. 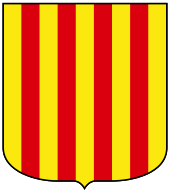 The Ancien Régime province of Roussillon, which had formerly been integrated with the Catalan counties, the Kingdom of Majorca, and the Principality of Catalonia within the Crown of Aragon, was attached to the Crown of France under the Treaty of the Pyrenees, signed on 7 November 1659. Prior to this treaty, the border between the kingdom of France and the Principality of Catalonia lay further north, along a line of citadels (Treaty of Corbeil).

These territories corresponded to the Catalan counties of Roussillon and Conflent, founded in the 9th century, as well as to the northern part of the County of Cerdanya, to which was added the former Vicounty of Castelnou, or Vallespir (the pagus of County of Besalú, united with the County of Roussillon in 1209). The new Province of Roussillon[34] also known simply as Roussillon,[35] brought together the medieval administrative courts, or vigueries, of Roussillon,[36]Conflent,[37] and the north of the County of Cerdanya[38] which were part of the government structure of the Crown of Aragon’s (and attached to the Principality of Catalonia) counties of Roussillon and Cerdanya (governació dels comtats de Rosselló i Cerdanya in Catalan)[39] at the time of their attachment to France. Roussillon was subject to direct taxation as a pays d’imposition (taxing country) and did not have representation through the Estates[40] (a provincial assembly, the provincial assembly of Roussillon,[41] was created on 15 August 1787).[42] It formed both a government[43] and an intendance[44] and reported to the Secretary of State for War as a border province. It had sovereign jurisdiction: the Sovereign Council of Roussillon, independent of the Parlement of Toulouse.

Currently, the name Roussillon is still the most widely used to designate this territory, being found in the denomination of the former region of Languedoc-Roussillon.

Today, the territory is often subdivided into five unofficial traditional and natural comarques: Roussillon proper, Vallespir, Conflent, Upper Cerdanya and Capcir. A recent addition is Fenouillèdes, the Occitan part of the department of Pyrénées-Orientales.